Bordering the Coral Triangle, Palau is home to over 700 species of coral (including 400 hard corals) and over 1300 species of fish, at last count. This is testament to the fact that the warm tropical waters of Palau (typically an agreeable 29°C/84°F) offer the most diverse marine life in Micronesia.

With over 60 dive sites, stunning underwater topography and history-filled wrecks, Palau offers a huge variety in dive sites, including some world-famous highlights.

Whether it be the strong currents and pelagic action of Blue Corner, Ulong’s beautiful hard coral gardens or its breathtaking drop-offs, Blue Holes or fascinating WW2 wrecks, Palau’s boasts a fantastic array of world-class dive sites.
With large schools of fish, and critters ranging from manta rays and sharks all the way down to mandarinfish and nudibranchs, there is always something to look at in Palau’s clear blue waters.

Palau has been written about in numerous diving publications, and is often rated as one of the “Top 3” diving areas in the world.

Palau’s diving offers a great diversity.
Palau is notably famous for its “corners” dives, which combine a drift along a wall, with two or three stopping points in the current, where it’s possible to observe big pelagics (grey reef sharks, large schools of fish, barracudas, trevallies, hunting action and more…).
Depending on conditions, these dives can be quite advanced if the current is strong, and generally require the use of a current hook (reef hook).
Neco Marine offers current hooks for rental or purchase, and our guides teach divers the proper use of this handy invention.

While Palau is mostly renowned for large pelagics, with chances of seeing reef manta rays cleaning or feeding (German Channel), there are also some interesting macro critters to be found, especially on wall and sandy bottoms.
One could say that the local diving is at something of a crossroad between South Pacific pelagic dives and Southeast Asian diving, while offering a great diversity of diving profiles.

Palau’s fish spawning dives (humphead parrotfish, snapper…)  are another one of Palau’s local specialties – these events are linked to the lunar cycle (new moon, full moon) and require leaving the marina at dawn, at around 6 am.
These special dives are reserved for experienced divers (we recommend a minimum 50 logged dives) with good air consumption, and able to hover comfortably in the blue with little visual references, since you need to wait patiently around 15m / 50ft for the show to begin.

Reef dives might well be regarded as the ‘bread and butter’ of Palau’s diving, but they are not to be taken lightly. The outer coral reef surrounding Palau’s lagoon is one of the reasons why this island nation is famous in the diving community.

Names like Blue Corner, Big Drop-Off, and Peleliu Express make divers all over the world salivate, and come back for more.

What draws people here? Is it the ripping currents and fast drift dives? Fantastic shark action? The huge schools of barracuda, trevally, fusiliers, and oyramid butterflyfish, just to name just a few? The sedate pleasure of the beautiful hard coral gardens? The breath-taking soft corals of the wall dives?
Take your pick. When we say there’s something for everyone, and we mean it!

Palau has several amazing “corner” dives, made special due to the strong currents sweeping across these exposed reef corners jutting out into the ocean. The strong currents bring with them plankton (the base of the marine food chain) which in turn brings in all varieties of marine life, in abundance. 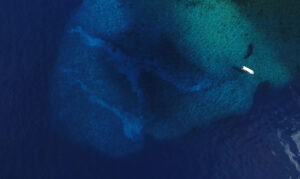 Strong currents also provide the opportunity to ‘hook-in’. Here in Palau we use reef-hooks (current) to get the best view of the action without having to fight the current, and protect the reef. Hooked in just back from the edge of the reef with a slightly inflated BCD, it’s possible to hang in the current above the reef with no effort and chill out while observing the action unfold before you.

Palau offers diving in various natural and man-made channels. These channels are usually best dived on an incoming tide allowing divers to drift effortlessly through the channels.

There are many wonderful wall dives around Palau which usually involve drifting with the (usually) mild current. There is often good visibility (30m / 100ft) and an abundance of healthy coral on the walls, which drop off very steeply into the blue. Our beautiful gardens present themselves as more gently sloping coral vistas with pristine coral formations in every direction.

With over 60 wrecks, Palau has wreckage of all sizes and shapes. Some wrecks are so shallow that you can snorkel around them. Others, such as the famous USS Perry, are so deep that technical dive certifications are required. Many wrecks are, however, within reach of any diver holding an open water, or preferably advanced open water certification.

Many of Palau’s wrecks are the legacy of US air raids on the Japanese naval forces (Micronesia had been under Japanese mandate since 1914), especially in 1944, with raids such as “Operation Desecrate One.”

Many of the lagoons are littered with WWII wrecks, with the highest concentrations in the waters surrounding Koror, and the Malakal island harbor area. You can dive everything from fighter seaplanes, seaplanes and landing crafts to cargo ships and destroyers. We also have a few wrecks of fishing boats around Palau, some converted by the Japanese during the war, and others unrelated to WWII, which are still definitely worth diving.

Typically we dive wrecks as either the first or last dive on a three dive day, with the other two dives being reef dives. If your group charters the whole dive boat, then we can dedicate as many dive days as you desire to wreck diving.
Night dives can also be organized on wrecks such as the Hafa Adai Ferry Wreck

Be warned that most of the wrecks have not been properly salvaged and as such may well still contain unexploded ordinance – and are also gravesites of many sailors killed in action, so dive respectfully, and so no touching.

For basic safety reasons, we do not allow wreck penetration, which is specialized technical diving, requiring special training, equipment and planning to perform safely and responsibly.

Cave systems of all shapes and sizes are found in the limestone Rock Islands of Palau, both above and below the water.
Chandelier Cave is actually a cavern (the exit point is always visibile during the dive), and offers a unique opportunity for divers of all levels to experience safe diving in a overhead environment.
Blue Holes is another favorite with many divers and has been described as cathedral like, with the four holes providing enough ambient light for photos without the need for artificial lights.
Siaes Tunnel near Ulong Island and Virgin Blue Hole at Ngemelis are also two very popular cavern dives.
Most of these are deep dives and descend far deeper than recreational limits, for this reason it is important to follow your guide, use a dive computer and monitor your depth carefully.
An Advanced Open Water and Nitrox certification is also recommended to make these deeper dives safer.

These awesome, intelligent creatures are the largest rays in the ocean, reaching up to 7m (22’) across for the largest Mobula birostris manta rays.

Palau’s manta rays are the smaller “reef manta rays” (Mobula alfredi), but are still fascinating to watch as they “fly” through the water.

The best chance to see manta rays is at the “cleaning stations” found in the channels on the outer reef line. Cleaning stations are communities of small fish who consume small parasites off of the mantas.

If mantas are a priority for you, then January through February is the time to come to Palau. The mantas become more numerous during this part of the year as they form large groups in and around the channels to mate. At this time, spectacular displays of synchronised swimming and underwater acrobatics can be observed.

These beautiful little fish are covered in stunning colours and patterns. The males in particular are wonderful to see, as they grow bigger than the females and possess an enlarged dorsal fin. Their elusive behaviour, however, makes them difficult to find and a “holy grail” for photographers and videographers. 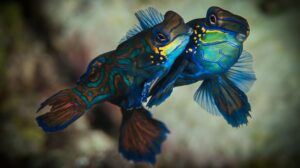 Mandarinfish feed on small invertebrates found in the mud and silt at the bottom of shallow areas of Palau’s marine lakes and lagoons. For most of the day they crawl around inside corals making them difficult to spot. As the light drops in the late afternoon, they become more active, and at dusk they rise to the surface in pairs for courtship and mating displays.

By request, we can make an additional stop (3rd dive or snorkel) in the late afternoon to the aptly named Mandarinfish Lake. Or, if you like, we can arrange a dusk dive to catch these wonderful fish in the act of courting, mating, and laying eggs!

Mandarinfish can be also found near the entrance of Chandelier cave.

DIVING FOR ALL SEASONS

Palau is a tropical region with heavy rainfall and high humidity, with otherwise great weather all year around. And just like the weather, the diving in Palau is also fantastic throughout the year!

Climate change means that there is no real dry season in Palau anymore – it rains a lot all year round, but December to March are still the driest months, and the most active for diving, generally offering excellent overall conditions.
December to January is also Palau’s high season, the busiest months on land or in the water.

Underwater visibility is generally very good in Palau, which boasts famously clear blue waters – indeed the island’s limestone topography reduces the influence of rainfall and run-off, but wind directions can generate strong swells.
As a general rule, visibility is better on an incoming (rising) tide, when off-shore water flows into the lagoon, than on outgoing (falling) tides, when particle-rich lagoon water flows out towards the open the sea. 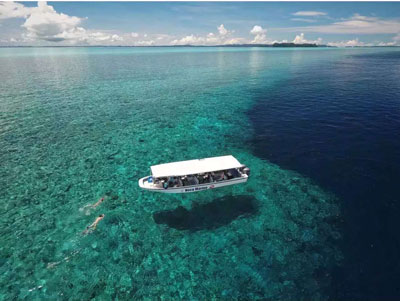 Looking to budget your trip to Palau? Click for our current rates

Palau’s main dive sites are concentrated in the Rock Island Southern Lagoon UNESCO reserve (Chelbacheb Islands).
In this area, we regularly dive major sites of the Ngemelis Island area such as Blue Corner, Blue Holes, German Channel, and also those in the Ulong Island area (Ulong Channel, Siaes Corner, Siaes Tunnel…), depending on conditions, schedule and the level and experience of divers.
If schedule allows, it’s also possible to combine diving and a visit to Jellyfish Lake on the same day.

We typically require a minimum of 4 divers per boat to cover fuel costs for remote sites.
However, some sites (Japanese wrecks, Chandelier Caves, etc.) are closer, in the lagoon, and do not require a fuel surcharge even if there are less than 4 divers. These protected sites are also where we can organize night dives. 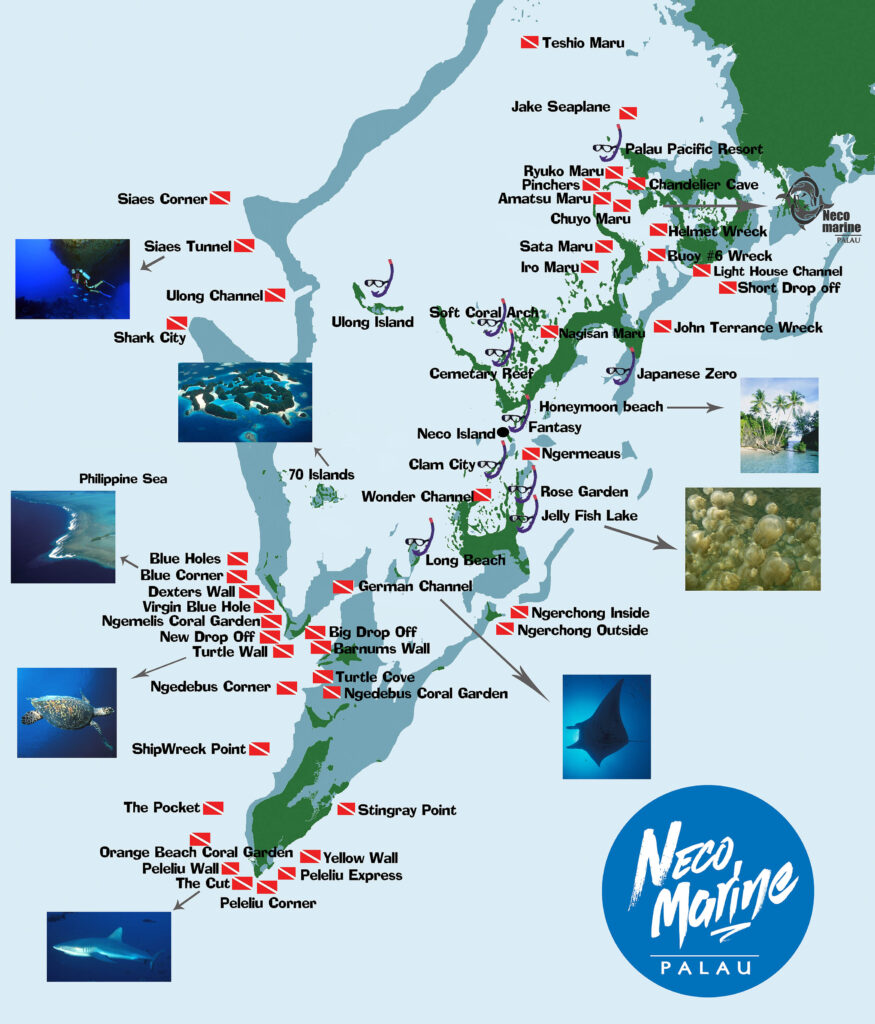 Peleliu Island dive sites (Peleliu Corner, Peleliu Cut, Yellow Wall…) are not part of our standard day-trip offer.
Indeed, diving Peleliu incurs a fuel surcharge due to the distance, as well as the purchase of an additional Peleliu State Permit.
More importantly, the diving there is some of the most advanced in Palau, with variable conditions and often unpredictable and complex currents (up and down currents, washing machine, etc.), and are therefore reserved for divers with extensive experience in complex currents (not only in drift diving).

We can organize charter trips for experienced divers, but this requires proper advance planning, and remains subject to conditions.